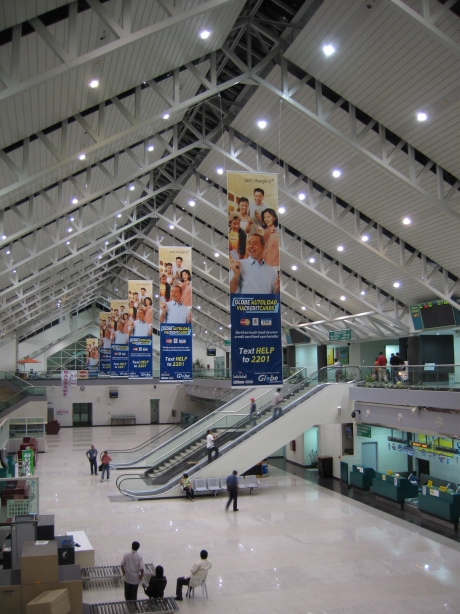 The P2.7 billion passenger terminal is a Malay architecture-inspired building which is four times larger than the old terminal. It is fully computerized, more secure and has more commercial spaces for concessionaires at approximately 9,000 sq. meters of gross leasable area. It has four units of jet bridges for passengers. It has also a Flight Information Display System and Closed-circuit television system complementing the terminal's security system.

The terminal has 14 domestic and 14 international check-in counters that can handle a steady flow of passenger traffic. The Check-in counters are equipped with electronic weighing scales and conveyors and its baggage handling system is also computerized. It also has 2 arrival areas, for domestic and international with 2 baggage conveyors each. The Cargo Terminal Building covers almost 5,580 sq. meters and can handle up to 84,600 metric tons of cargo a year.

This site is in no way affiliated with or endorsed by specified business. It exists as a compendium of supporting information intended for informational purposes only. If you want to buy this website, please don't hesitate to contact us via e-mail: domain (dot) sales (dot) org @ gmail (dot) com or you can find and buy it on Afternic domain auctions.